Renaissance Music from Italy and Spain 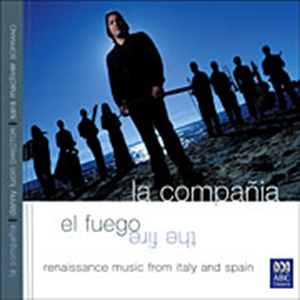 Under the direction of Danny Lucin, La Compañia is a group of Melbourne musicians united by a desire to explore early European music.   ORDER NOW>>>   You can purchase this Disc from iTunes

Their instrumental blend of strings, winds and brass allows for exciting sound combinations and together with their impressive use of improvisation and ornamentation has established their reputation for presenting innovative programs and dynamic performances. Italian and Spanish music of the Renaissance is the focus of this album which stars special guest soprano Sara Macliver.

This wonderful disc is a real departure for the early music community in Australia. Few performers have ever attempted to commit to disc this very adventurous and challenging Spanish repertoire. Sara Macliver’s silvery soprano is ideally suited to it, though, and her colleagues in La Compañia support her admirably. The group’s founders Danny Lucin and Mitchell Cross have created a group which ventures into almost unchartered waters for Australian early music performers, and the results are something they can be proud of.

ABC FM CD of the week

This gifted group of early-music experts, directed by Danny Lucin, performs on period instruments or reconstructions. Sackbuts, cornetti, dulcians, viols, vihuela and Sara Macliver’s soprano combine to give a brilliant recreation of instrumental and vocal music by Willaert, Merulo, Guerrero and Anonymous. Right from the opening chaconne, La Compañia sets a high standard in accuracy and shaping on these treacherous instruments, taking the listener on a romance-flavoured tour, winding up with the title track, a semi-religious, semi-dance piece memorable for its juxtaposition of the temporal and the spiritual. A memorable ABC Classics release.

In El Fuego (ABC Classics 476 5955, rec 2005/6, 59′), the Australian group La Compañia performs another CD of loud and soft consort music, this time from Spain and Italy. The opening Chacona: A la vida bona by Juan Arañés (d c.1649) captures La Compañia’s delight in the interesting phraseology that this music invites, emphatic hemiolas in this instance, and their seductive use of percussion-castanets here. The unification of the kingdoms of Castile and Aragon and the riches from the discovery of the New World led to an increase in wealth and patronage mirrored in the growth of musicians employed; instrumental groups were employed in cathedrals, typically cornetts, shawms, trombones and dulcian. Francisco Guerrero, maestro di capella at Seville, is represented by two exquisite villancicos de navidad- which were commonly performed in the cathedral porch as a Christmas diversion. In A un niño llorano, describing the Christ child crying in the freezing cold, La Compañia does not shy away from orchestrating in a musically satisfying manner on the pretext of lack of specific evidence; thus it opens with voice with plucked accompaniment, to which is added strings and then brass. The disc takes its title from the extended concluding item-El Fuego by Mateo Flecha, which juxtaposes markedly contrasting moods: lively rhythmic dances with more reflective sections. In this piece and throughout the disc, the excellent soprano Sara Macliver captures the contrasting rhetoric of the words with consummate skill.

The balletto L’innamorato, published in Venice by the Italian, Giovanni Giacomo Gastoldi, became an international bestseller, reprinting over 30 times, and strongly influenced the ballets of Thomas Morley. La Compañia performs it with vocal verses interspersed with instrumental ritornellos decorated with copious light-hearted divisions. Italians linked to St Mark’s feature strongly with music by Adrian Willaert-who was maestro di cappella between 1527 and 1562-his pupil Nicola Vincentino and Claudio Merulo, who was the first organist from 1564. Throughout this disc variety is maintained by a carefully orchestrated approach. Anything with a dance element is given percussion to add colour; this is used imaginatively even including the ‘clutch and ring’ effect on the triangle derived from late 20th-century populist music in the anonymous Ben venga maggio.

La Compañia was established in 1997, with Danny Lucin and Mitchell Cross as its musical directors. Based in Melbourne, and drawing on a number of Australian instrumentalists specialising in early music, La Compañia has worked pretty extensively in concerts and festivals in Australia. This is the band’s second CD; the first – which I haven’t heard – issued in 2000, was Music of the Spanish Renaissance (Move Records MD 3225). That CD presumably had a somewhat narrower focus than this second CD, a relatively loosely conceived anthology.

On seven of the nineteen tracks, the soprano voice of Sara Macliver is featured. She sings with a kind of pert charm in the anonymous ‘Niña y viña’ and uses the top of her voice with great purity in Manuel Machado’s delightful ‘Dos estrellas le siguen’ which, with its relatively minimal accompaniment is a lovely contrast to the very busy music surrounding it on many of the other tracks. In the lengthy piece which gives the CD its title, ‘El fuego’ by Matheo Flecha, the elder, she handles the changing moods very effectively, though perhaps neither she nor the instrumentalists of La Compañia quite persuade us of the intensity with which the fires of sin burn in the opening of Flecha’s but at the piece’s conclusion she sings radiantly of the saving ‘pure water’ of the incarnate Christ.

As an instrumental ensemble, La Compañia can offer a rich palette of colours and tones. Danny Lucin brings an attractive vocal quality (without exaggeration) to much of his work on the cornetto; the sackbuts of Glenn Bardwell and Bob Collins are played throughout with precision and appropriate power. Rhythms are lively and properly insistent – not least in the suite of anonymous dance music, compiled from a variety of Florentine sources, which draws on popular songs such as ‘Ben venga maggio’ and ‘En questo ballo’.

It is good to hear Pedro Guerrero’s remarkable ‘La perra mora’, with its metre of 5/2, which and Antonio de Cabezón’s version of Maistre Gosse’s ‘Je fille quant dieu me donne de quoy’, both of which elicit some expressive playing from all concerned.

Indeed, there’s nothing here that isn’t well worth the hearing. If I have a reservation it is the miscellaneous nature of the programme, in which it is hard to discern real continuities or patterns of development. Good as Michael McNab’s booklet notes are, they don’t really persuade one that there is any very precise unifying factor in the proceedings. But perhaps it doesn’t have to be like that. If you simply want a miscellany of solo vocal and instrumental music from sixteenth century Spain and Italy this would be a pretty enjoyable one to have.